The Desert Ruins are an area in The Witness. This area revolves around reflections. They are located in the sandy beach area between the Quarry and Symmetry Island. Its central point is a crumbling white structure that features uniquely shaped puzzles resembling ship wheels, which are different from the typical grid-based puzzles you'll find in most parts of The Witness.

The puzzles here are among the earliest that introduce the role of the environment in solving panels. 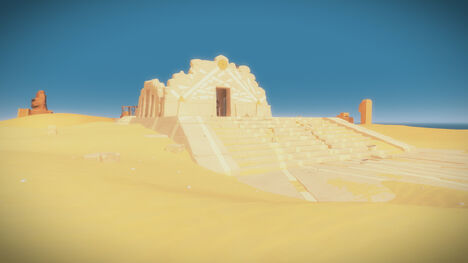 You can easily complete the Desert Ruins with no prior knowledge of other areas in The Witness.

Completing the exterior of the ruins grants access to the interior.

Completing the interior of the ruins activates the area's laser.

Some stairs in the cliff allow a walk around the nearby beach. 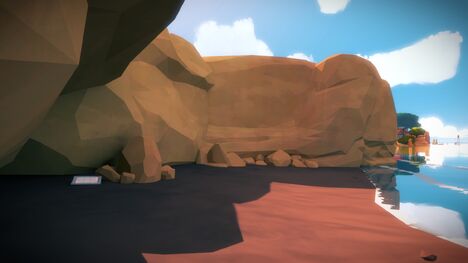 There is a discarded panel at the very end of the Desert beach you can reach beyond the ruins, where a stair path will take you down to the water's edge. Keep following the beach as it loops back around towards Symmetry Island to find the panel. 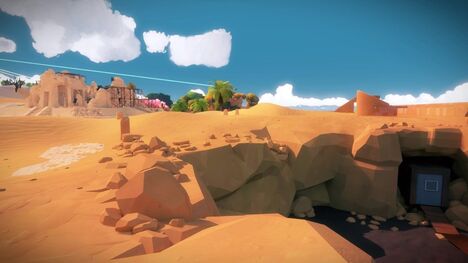 If you walk past the Desert Ruins towards the ocean you'll find a stone staircase which leads to a small beach. There you will find the second vault door. On the door there is a tetris & negative block puzzle. Solve the puzzle and go on inside for the briefcase. 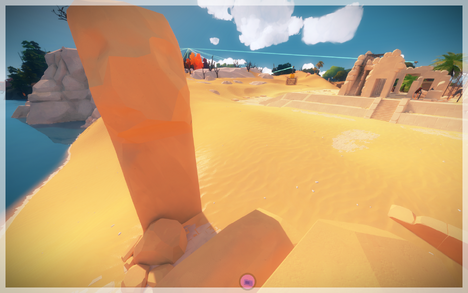 Head past the main ruins to a small ruined wall on the far side by the coast (if you've completing the Desert Obelisk, that's where the enviromental puzzles 7 and 8 of side 4 are located). Climb to its top, past the big circle that reflects solar light, and look down to see the tape.

I maintain that the cosmic religious feeling
is the strongest and the noblest motive for scientific research.

Only those who realize the immense efforts
and, above all, the devotion

without which pioneer work in theoretical science
cannot be achieved

are able to grasp the strength of the emotion
out of which alone such work,
remote as it is from the immediate realities of life, can issue.

What a deep conviction of the rationality of the universe
and what a yearning to understand,

were it but a feeble reflection
of the mind revealed in this world,

Kepler and Newton must have had
to enable them to spend years of solitary labor
in disentangling the principles of celestial mechanics!

easily develop a completely false notion of the mentality
of the men who, surrounded by a skeptical world,

have shown the way to kindred spirits scattered wide
through the world and through the centuries.

and given them strength to remain true to their purpose
in spite of countless failures.

It is cosmic religious feeling that gives a man such strength.

A contemporary has said, not unjustly
that in this materialistic age of ours

the serious scientific workers
are the only profoundly religious people.