The River Obelisk is one of six large black structures found on the island in The Witness. It is located in the River area. It's purpose is directly tied to that of the many hidden Environmental Puzzles, and solving any of the nearby puzzles will light up a corresponding symbol, and reveal the symbols of other nearby puzzles.

Each face of the obelisk represents an area full of puzzles. The number of symbols in a column represent the number of puzzles in a given area, and the direction of the column indicates where the puzzles can be found. 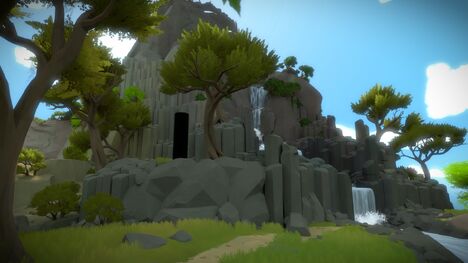 Use the following section to locate where the puzzles are located, and the images to reveal the puzzle location itself. 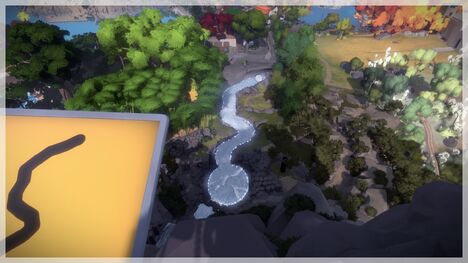 This particular symbol can only be seen from one of the highest vantage points on the island - the Mountain summit. At the top, head past the statue surveying the center, and look for a panel with a matching symbol - you'll spot it in the river itself.

To find this symbol you must turn your attention to the skies. There's a group of clouds that can come together at the right place to form a symbol. Of course to find that area you need to explore around the mountain until you find a falled tree. Look towards the roots to find a side path doubling back around the mountain, and look up near the river to find your vantage point.

Note: If you look to the sky and you see the start and the end of the path in the clouds, but there is no path like the picture shows, all you have to do is wait. The clouds will move into position if you wait long enough. 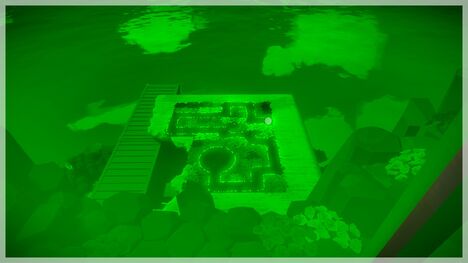 Inside the Greenhouse Bunker elevator, travel to the 5th floor (possible by using the panel to go the 6th floor and jumping off as it passes the green-lighted room. Once in the room, look out the window at the flowers below to see a pattern emerge. 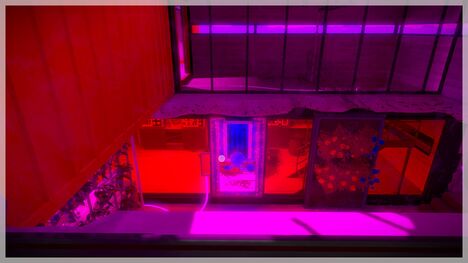 Once you solve the first few puzzles at the entrance to the Greenhouse Bunker, head up one floor along the compartments to a purple and red tinted room. Look out the window at the first floor door you moved back, which now looks blue - and has a symbol to trance.

As you go down the inisde of the mountain, when you come to the second room where when you draw a line it creates the walkway, look up and trace the underside of the walkway from the previous level (doesn't matter how it was solved)

Similar to Symbal 3.  Next level down, trace the pattern of the previous level (note that the path has to exit out the side to get the semicirlce end)

Repeat of Symbol 4, only you need to have the 'other' path exit out the side to get the semicircle.  (So up the elevator and resolve that floor)

At the top of the mountain looking up at the arches, you can align the dark 1/2 of the top circle with an edge of another arch. 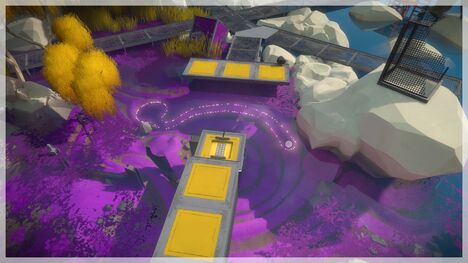 The first time you come upon the Color Swamp, head to the far side around the ring of the mountain that has a path leading down to the swamp. A large rock outcropping above provides a perfect vantage point down at a yellow moving platform with purple swirls below. The first of three patterns can be viewed before any puzzles are solved.

The second of three can only be viewed just after solving the puzzle in the middle to cause the platforms to adjust from the side closest to the rocks, over to the dock side. The moment you begin the move, run back to the rocky vantage point and wait for both sides of the platform to move apart, revealing the ring below.

To get this symbol you'll need a boat. Go to the docks at the Swamp for the quickest ride. To be sure you get the symbol the first try avoid going at top speed but the slower speeds will obviously take much longer to get it.As you pass the Mountain you'll see a large yellow pipe. Start there and do not let go. Take the yellow trail down the mountainside. Do not go too far down as your path will be cut short due to perspective shifts from your boat ride. When the time is right you'll see the yellow path transition to a green path around the Greenhouse and the symbol is as good as yours. 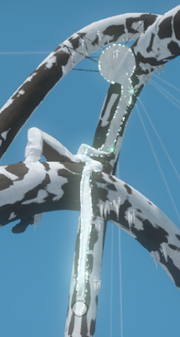 At the top of the mountain looking up at the arches, you can align the 2 white 1/2 circles and start a path down one of the legs.  Follow the fork to the right for this one (Symbol 7 is the fork to the left). When traveling around the path looping around the mountain, look for a large shrubbery pile near the path to the Color Swamp. Notice the darker color in the center an trace the path around to the outside.

At the top of the mountain looking up at the arches, you can align the 2 white 1/2 circles and start a path down one of the legs.  Follow the fork to the left for this one (Symbol 5 is the fork to the right). 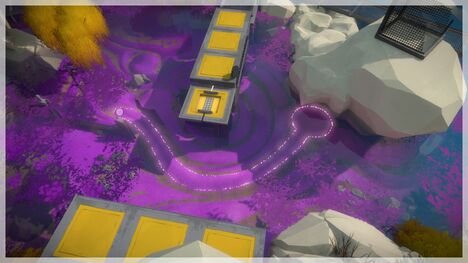 The final of three puzzles in the purple section of the swamp, you can find this one just by solving the puzzle in the middle of the moving platform to cause it to sync up with the side closest to the dock. Then run back around to the vantage point on the rocky side to trace the symbol.

In the swamp, from the "L" rotating piece, head down the purple path and down the stairs. (same location as Symbol 7)

For this symbol (and symbol 5) we need to head back to the rotating "L" piece in the swamp.  Start by having the "L" connect the Blue and Black paths as seen here 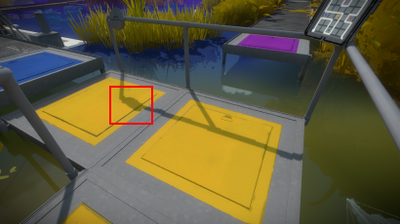 We will be using the shadow in the red highlight.  We need to have the "L" piece rotate counter clockwise two stops (ending up connecting the purple and broken red paths) The puzzle solution below will move it the right direction. (other solutions might rotate clockwise) 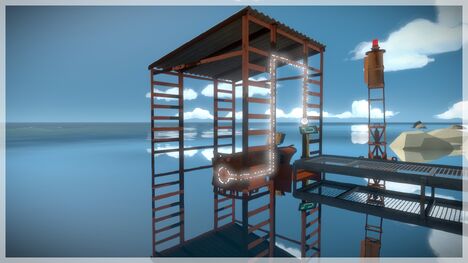 To find this symbol, you must already have the boat activated from it's initial starting point past the town. Now head to the Color Swamp's dock, either from a boat - or summon it there. Use the back of the boat as a starting point to trace along the boat's dock.

When you first find the purple swamp area, a moving yellow platfrom by the dock will be set, but by moving onto the nearby rocks you can see part of the symbol on the side of the platform. To get both sides of the starting point to have the same shade. Use the puzzle to bring over the other platform. As the first platform moves back, run back to the rocks and get ready to trace as it floats into view.

For this symbol (and symbol 2) we need to head back to the rotating "L" piece in the swamp.  Start by having the "L" connect the Black and (broken) Red paths as seen here 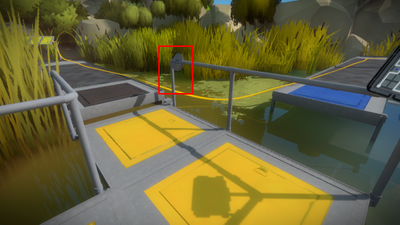 We will be using the shadow made but the circle in the red highlight along with a shadow that is going to be coming accross the path.  We need to have the "L" piece rotate clockwise three stops (ending up connecting the blue and purple paths) The puzzle solution below will move it the right direction. (other solutions might rotate counter clockwise)

As the "L" piece starts rotating, click on the circle (when it forms and follow the path as seen above.  Just before going off the edge, a shadow from a nearby post will come and let you continue by moving to the left.  After a short time on this new shadow, the shadow from the other hand rail will come into view.  Follow it around and you are good to go. 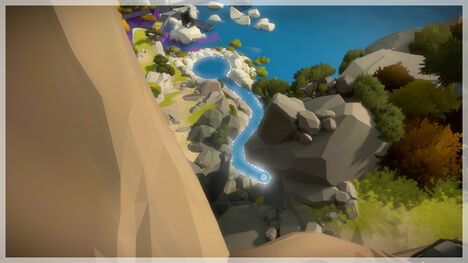 While you're climbing around the mountain above the Color Swamp area, look past the large shrubbery area with a previous puzzle symbol and align the rocks with a small basin by the shore to form this symbol.

In the swamp, from the "L" rotating piece, head down the purple path and down the stairs. (same location as Symbol 1)

From the yellow sliding platform that moves between red and cyan swamp areas (also used in Symbol 3 and Symbol 4), find this puzzle down the stairs in the cyan area.

It's another color blending puzzle. The red bridge in green water doesn't quite match the salmon color in either end position, so you'll have to start the bridge moving then run down the stairs. Note that you can solve the bridge puzzle standing just off of the moving platform.

This puzzle is solved by being near the pillar puzzle (seen here) that you need to activate on get to the Challenge tunnel.

Walk out to the edge and look up. 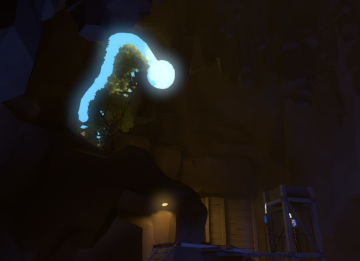 At the front entrance to the Color Swamp, you'll run into your first yellow moving platform. There are two puzzles to be found here, each when moving the platform in a different direction. Move the platform to the far side first, then use the panel pictured above to send it back, but watch for a starting point to briefly be made before waiting for the end of the trace to come into view.

Similar to the previous one, send the bridge back using the puzzle above, and check the opposite side for a starting point, but be sure to finish it before the starting point goes out of view. 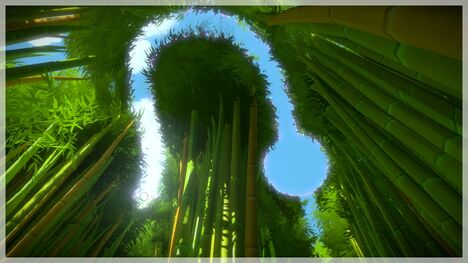 Travel into the bamboo forest and keep your head up as you travel through the windings paths. Near the center you'll find a semi circle area where you can score to symbol patterns off the same starting point. 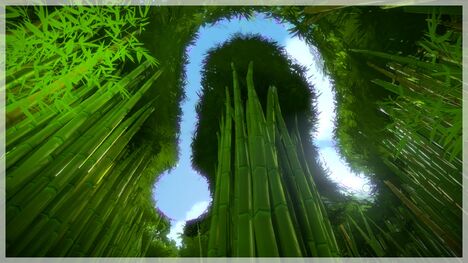 From the previous symbol, head to the other side of the semi circle to find the other looping path.