Symmetry Island is an area in The Witness. This area introduces puzzles with two simultaneously drawn lines. It's a small, rocky peninsula located next to the Glass Factory and across from the Orchard. It contains one of the earliest lasers you can activate in The Witness, which is locked away behind two gates that need activation via surrounding puzzles before they can be opened.

In addition to symmetry and mirrored lines, Symmetry Island is also one of the first areas to introduce the importance of the environment in solving puzzles, which is key to moving forward in The Witness.

Good places to move on to next include the Orchard or the Desert Ruins, but as always, you're free to explore on your own.

Completing the glass factory grants access to the island.

Upon completing the glass factory, the puzzle locking the first gate will become solvable, granting access to the island. Completing the puzzles scattered around the island will allow the second gate to be opened, and completing a final set of puzzles will activate the area's laser. 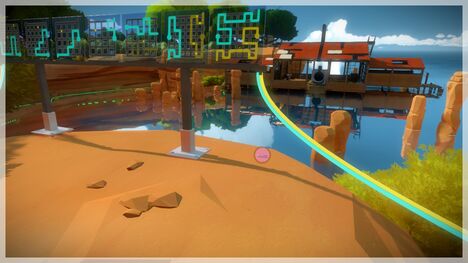 This one can be found on the island next to the Glass Factory, known as Symmetry Island. To get here you'll need to unlock the door to this island. Once you're through go down the stairs and around the island until you're looking back at the Glass Factory. You'll find some panels for a puzzle to solve, but right under them is your next audio log!

Formerly you appeared to me, O Lord,
as invisible by every creature

because you are a hidden, infinite God.

Infinity, however, is incomprehensible
by every means of comprehending.

Later you appeared to me as visible by all,
for a thing exists only as you see it,

and it would not actually exist unless it saw you.

Thus, my God, you are equally invisible and visible.
As you are, you are invisible;

You, therefore, my invisible God, are seen by all,
and in all sight you are seen by everyone who sees.

You who are invisible,
who are both absolute from everything visible
and infinitely superexalted,

are seen in every visible thing
and in every act of vision.

Therefore, I must leap across this wall of invisible vision
to where you are to be found.

But this wall is both everything and nothing.
For you, who confront
as if you were both all things and nothing at all,

dwell inside that high wall
which no natural ability can scale by its own power. 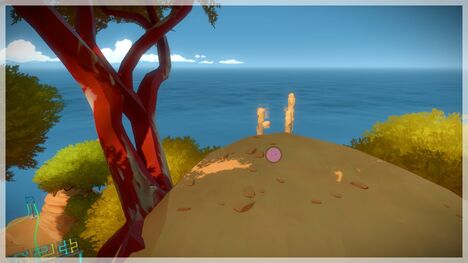 Another audio log found on Symmetry Island, it can only be obtained after going through both of the island's doors. After this you'll see a stairway to the top, but instead of going up you need to make a detour to the left. Walk along the side to reach a cliff with a tree that overlooks the ocean where you'll get a tape!

One nature, perfect and pervading,
circulates in all natures;

One reality, all-comprehensive,
contains within itself all realities.

The one Moon reflects itself
wherever there is a sheet of water,

And all the moons in the waters
are embraced within the one Moon.

The Absolute of all the Buddhas
enters into my own being,

And my own being is found
in union with theirs....

The Inner Light is beyond praise and blame;
Like space it knows no boundaries,

Yet it is even here, within us,
ever retaining its serenity and fullness.

It is only when you hunt for it that you lose it;

You cannot take hold of it,
but equally you cannot get rid of it,

And while you can do neither,
it goes on its own way.

You remain silent and it speaks;
you speak, and it is dumb.

The great gate of charity is wide open,
with no obstacles before it.